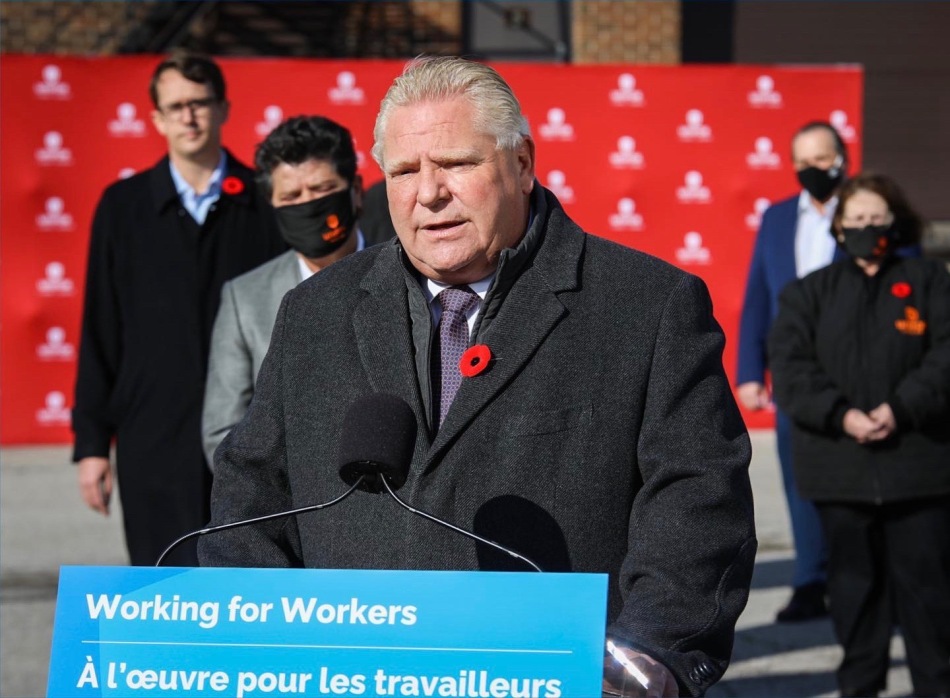 As wide as Conservatives have tried to extend their ‘big blue tent’ over the years, organized labour has very rarely found itself aligned with the party spent the most time in government in Ontario: The Progressive Conservatives. In 2018, when the generally populist government of Doug Ford swept to power, this natural estrangement was almost certain to continue – and for the better part of two years, continue it did.

Skepticism surrounding Conservative-Labour relations has been swelling since Mike Harris’ union-busting days as Premier, and with few efforts made by subsequent PC leaders, Doug Ford’s brand of populism seemed to offer little hope for union strong men like Jerry Dias of Unifor, and Warren ‘Smokey’ Thomas of the Ontario Public Service Employees Union. From rolling back minimum wage increases and being used as the scapegoat for the previous government’s failures on retaining Oshawa’s General Motors assembly plant, Ford’s Progressive Conservatives once looked set for a bitter four years squaring up with Big Labour.

Nonetheless, when in 2019 Monte McNaughton was tapped as the government’s next Labour Minister, his calm, steady, and genuine approach in dealing with Big Labour and its outsized representatives proved a welcome change for both sides.

Since taking up his new role, Minister McNaughton has taken the initiative to increase workplace safety precautions and inspections while also promoting skilled trades as a viable and honourable career path for young Ontarians. All the while, the Minister and PC Party at large has progressively bolstered its position on streamlining the immigration process for foreign workers wishing to make a new life in Ontario. In addition to targeting underprivileged communities, including Black and Indigenous communities in every corner of the province, the government of Ontario has made a concerted and genuine effort to transform the ways in which Ontarians, new and established, view the future of work.

Framed by the COVID-19 pandemic, the exposure of pre-existing shortcomings across all industries has put Ontario in a unique place to be able to innovate and rethink its strategy in addressing areas like Long-Term Care, Trucking, Mining, Agriculture, and the broader small business sector.

In one of the government’s most recent actions, the passing of the Working for Workers Act, measures are being introduced to require right to disconnect policies, remove Canadian experience requirements for new Ontarians, protect temporary foreign workers from exploitation, mandate washroom rights for truckers and delivery workers, and allow the Workplace Safety and Insurance Board to distribute surpluses back to businesses. Among a variety of additional measures that have been taken to refine the ways in which Ontarians work, Premier Ford and Minister McNaughton also stood shoulder to shoulder with Labour leaders including previous adversaries Jerry Dias and Smokey Thomas to raise the minimum wage to $15/hr across the board.

These extensive measures, spearheaded by Minister McNaughton, have driven the refinement of Conservative-Labour relations in Ontario, and in reality, have become a quintessential plank of what the Progressive Conservative Party of Ontario has become. The party is now more engaged than ever before at the ground level with workers and families across the province, and more in touch with new Ontarians seeking to build the kind of life consecutive governments at all levels always offer in words, but fail to ever realize through actions – until now.

The magnitude of these critical labour and immigration reforms is given testament by praise and gratitude from various organizations that have historically shunned Conservatives. Sharaf Sharafeldin, Executive Director with the Muslim Association of Canada appreciated that the government will “make it easier for newcomers to match their foreign qualifications and skills to available jobs in Ontario”, and also “appreciates the extensive community consultations that the government engaged in to include diverse perspectives.” Debbie Douglas, Executive Director of the Agencies Serving Immigrants also adds that these reforms will “allow immigrants and refugees to better express their dignity through work, for themselves and their families.”

While the response from Labour leaders continues to be cautious of aligning with Conservatives, Mr. Dias and Mr. Thomas have given credit where credit is due. “I think it’s a good start … but there’s a lot of other work that still has to be done,” said Dias, showing a degree of gratitude for the change on minimum wage and a genuine willingness to work together on common interests going forward. As for Smokey Thomas, who has since announced his retirement, he said that “for the first time in dealing with three governments, we actually have a government that is listening and actually doing some very positive things for working people.”

Going forward, Premier Ford and Minister McNaughton have pledged to work with Labour in a more constructive manner to reach better working conditions and terms for workers in Ontario, and while the two groups have historically been on opposing sides, they are both open to a new, more cooperative relationship. In early December, Premier Ford appointed Dias to head up an auto task force with the explicit purpose of taking on American President Joe Biden and his ‘Buy-America’ policy aimed at edging foreign made automobiles out of their market in favour of domestically subsidized electric vehicles. Considering that the auto sector is at the centerfold of Canadian manufacturing, this appointment emphasizes the trust that Premier Ford has put in organized Labour and it represents a concrete action recognizing the role that leaders like Jerry Dias can play in reshoring Canadian industry.

The importance of this renewed relationship between Conservatives and Labour cannot be understated considering the ongoing reformation of Conservative politics at all levels in Canada. With Premier Ford’s populist emphasis in Ontario, the evolving national response to climate change and natural resource extraction, and the multitude of variable influencing national conservatism, blue-collar workers and labour organizations have the potential to be at the crux of a new conservative constituency not only in Ontario, but at the national level. The reality is that these workers naturally fit into the ideological and practical fold of conservatism, highlighting the importance of hard work and personal contribution to nation building and community engagement.

Whether or not this change of heart for Conservatives and Labour lasts beyond the tumultuous times of the pandemic and current economic circumstances is still uncertain, and only time will tell if the bond will grow or deteriorate. In any case, one thing is for certain, and that is that both sides are open and willing to come to the table and cooperate with each other, and as has been shown time and time again, a demonstration of good faith can be consequential in determining social, economic, and ultimately political outcomes in Canada.

0 comments on “Working for Workers: Ontario PCs Kick the Tires on a New Dawn of Labour Relations”